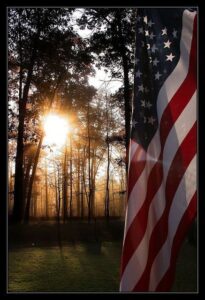 Independence Day is two weeks away. But recently, our emblem of freedom and promise – the American Flag – has come under attack, along with other foundational American icons and ideals. From COVID-19 to protests and riots, we find ourselves in fragile times. We know it can’t go on much longer like this. And we leave the solutions to prayer and support for those fighting for righteousness on the front lines of this culture war.

This blog is not about getting caught up in the inflamed rhetoric and ideologies of America’s current identity crisis. It’s not about racial divisions or the struggle to reestablish her unique foundations. 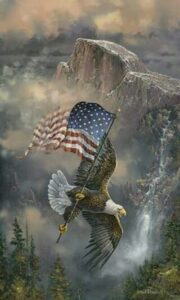 Hoist her High, Let Her Fly

On July 4, 1776, the Continental Congress declared the 13 American colonies’ independence from the British monarchy. It was a war hard won. The flag they chose would represent each of the fledgling states in their new life of freedom.

As the annual date of the founding of our nation nears, we at Lake Fork Providence RV Park want to celebrate the history of our flag. 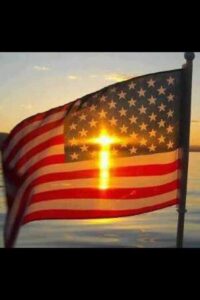 To remind, and be reminded, of its glorious past.

That Americans are willing to fight for its preservation and for the republic for which it stands. One nation, under God.

We are thankful to live in this great country. Land of the free, and home of the brave.

The flag of the United States of America has gone through 27 different iterations since its start.  The very first flag was the Grand Union Flag, which made its appearance at the beginning of the American Revolutionary War. 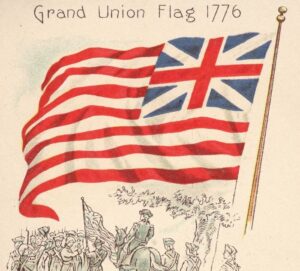 Continental Marines from Philadelphia were later seen carrying yellow drums emblazoned with a fierce rattlesnake. It was coiled and ready to strike, with thirteen rattles, sporting the motto “Don’t Tread on Me.”  That motto became part of the Gadsden flag. it was created by General Christopher Gadsden, leader of the Sons of Liberty in South Carolina. 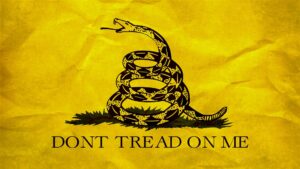 The flag’s symbolism was detailed by Gadsden’s friend and colleague, Benjamin Franklin:

Betsy Ross lost two husbands to the Revolutionary War. Despite her tragic losses, she was a strong woman, and continued on alone with her upholstery business. She often shared with friends and relatives that day, late in May of 1776, when three members of a secret committee from the Continental Congress came to call. 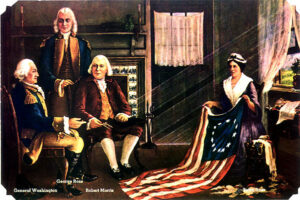 Those representatives were George Washington, Robert Morris (purportedly the wealthiest citizen and landowner of that day) and Colonel George Ross (uncle of her late husband John) who asked her to sew the first American flag for the brand new country.

The Declaration of Independence was read aloud for the first time in July at Independence Hall. The tolling of “liberty bells” was part of the citywide celebration.

Until that time, colonies and militias had used many different flags. From variations of the Gadsden to the simple yet profound Liberty Tree flag used by Washington’s first squadron of seven Navy cruisers.

Also known as the Liberty Tree flag, it sometimes stated “An Appeal to God”

The following year, on June 14, 1777, Congress passed a resolution. It declared the flag of the United States “be thirteen stripes, alternate red and white; that the union be thirteen stars, white in a blue field, representing a new constellation.” 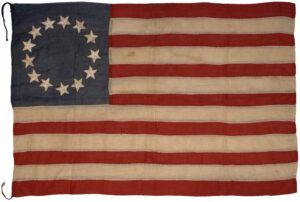 We Have a Winner

Today’s flag of the United States of America, with its 50 stars and 13 stripes, was created in 1958. It was designed by 17-year-old high school student, Robert G. Heft, of Lancaster, Ohio. Heft had only received a B- for his sewing project, but it was his design that President Dwight D. Eisenhower chose out of 1,500 entries. Heft’s teacher raised his grade after his American flag design won the contest.

There are many reasons to love our flag and its history. Sadly, many citizens don’t realize the precious cost of every stripe and star.

We lift up an Appeal to Heaven, and pray to see unity restored among the people in these tumultuous times. Our hope is that righteousness will prevail once more. And that it will bring peace and joy to the hearts of our countrymen and women.