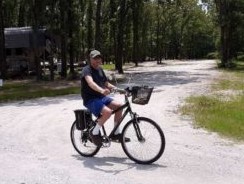 So, who’s living the full time RV life? I mentioned recently that one of our residents rides a motorized bike. I had never seen one, so was intrigued by it. Check out these pictures. He’ll take a ride to discover trails in the area or make a quick run to a grocery store.

Rick and his wife formerly lived on a houseboat. He said an RV had a lot more floor space as the walls were straight. So I guess they were not downsizing but upsizing. And after several years, they realized they wanted to be on stable ground.

They lived at Providence for a year before they recently had to move closer to their daughter. Rick told me he was sad to leave us and wish he didn’t have to, but family called. Wisely, he answered the call.

Sometime before he left I asked if he could tell me what he thought about our park, Providence RV Park near Lake Fork, TX.

“The thing that struck us when we first arrived was that it all looks precisely like the pictures on the web site. They didn’t cherry pick the photos to show the best like so many do. We soon discovered the noisiest thing in the park – Bird calls greeting the new morning. Well, okay, there is the occasional diesel engine. It quickly became home and the owners / staff and residents became our second family. If your idea of a good time is partying and loud music, this is not the place for you, but if your idea of great living is along the lines of a cabin in the woods next to a lake, this is your dream place.”

I would have to say that I agree with Rick. I do hear the birds first thing in the morning. Of course, we do have a number of residents with numerous bird feeders so that might have something to do with it. Now if I can only keep them off the front porch because of the…well, you know.

Headed for the trails.

Also, we carved this park into the woods. So it does have the feel of a cabin in the woods, and the lake is just a ½ mile down the road. Since most of our spot are large, we also have room for your boat.

That is why in the Spring and Fall we have numerous fishermen join us for the tournament weekends. That lends itself to a tale or two.